The Protest Art Show at Time & Space Limited in Hudson 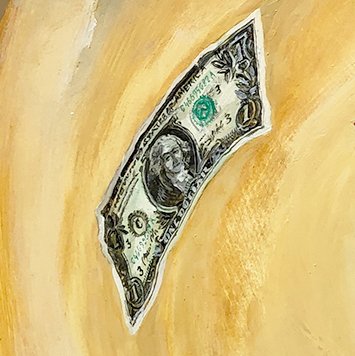 The Protest Art Show opened at Time & Space Limited (TSL) on Aug 31. The exhibit was curated by Arte4A, a collaboration by artists Pauline Decarmo, George Spencer and Tom McGill.

This exhibition is a din of about 100 works in diverse media, by approximately 50 artists (mostly local). Works in this show protest everything that begs to be protested–war, capitalism, corrupt leaders, sexual harassment, homophobia, racism, pollution, income inequality. The list goes on and on, because these problems are relentless. Thankfully, the works are not hung in particular/separate groupings, acknowledging that social and political problems overlap, often arising from a common source. So the show is fabulously chaotic and alive. It takes place in a large hall and adjacent room, between which is a revolving door labeled on either side COLORED ONLY and WHITES ONLY. The space is reminiscent of coffeehouses in the 1970s, inviting and funky.

A horde attended the opening– all races, all classes, all ages, forming talking nodes around pieces and actually looking at the art. For example– Alosa Sapidissima by Lydia Rubio–a river fish drawn with white paint and chalk on a black panel is erasable by the viewer, except for the plastic garbage inside the fish. There are Mrs. Butterworth bottles–with wicks. There are redacted documents. There’s far too much artwork here for a single viewing. And POTUS might be disappointed to know that, although referenced, his image is not front and center.